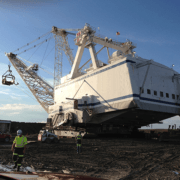 Advances in mechanics and electronics have made modern surface mining operations trivial in today’s world, but the presence of water in mining pits present a constant challenge in finding and retrieving mined material. That is all set to change however, as Queensland-based mining technology firm MineWare has released updates to its Pegasys dragline monitor that now allows support for underwater excavations – a world first for the mining industry. It is imperative to get in touch with a mining equipment supplier should you have any questions regarding the below article.

The latest rendition of the Pegasys now comes equipped with MineWare’s state of the art Machine Terrain Mapping (MTM) module that gives miners a detailed readout of the surrounding terrain – and even under water. This allows dragline excavators to accurately locate and retrieve material submerged at depths of up to 100 feet, as well as help mining operations find underwater mineral reserves that would have otherwise been too difficult to mine or too costly to scout out using more traditional methods.

On top of its new capabilities, the Pegasys has already made a name for itself in the mining industry as one of the most capable and most trusted dragline monitoring systems available on the market today. The Pegasys shows detailed information about all aspects of the excavator’s operation, as well as tracking and analysing the performance of the excavator in real time, showing live stress calculations per duty cycle. This information is shown to the operator as well as broadcast remotely to supervisors on separate computers through the mRoc Desktop software. Besides that, the Pegasys is also designed with interoperability in mind, with a flexible API that can be integrated into various third party software.

In a recent press release Greg Laedwig, Regional Vice President for MineWare North America, stated that the technologies integrated into their flagship product represents a massive breakthrough in mining technology. Machine Terrain Mapping would give miners massively improved underground visibility, which in turn improves the safety and efficiency of dragline digging and dredging operations. “This technology represents a major step forward for the industry with significant potential for productivity gains in dredge mining, re-mining, and the mining of flooded areas – where operations traditionally need to cease,” Laedwig said. “These inaccessible or hard-to-reach areas are now back on the table.”

Since its release, MineWare’s Pegasys has already been integrated into multiple mining operations around the world. Florida-based limestone miner Bedrock Resources was the earliest adopter of this new technology, utilising it in their mining operations since early 2018. The mining firm has reported that they have managed to recover nearly 50 thousand tons of un-mined, undiscovered material that was found with the help of the Pegasys monitor. A coal mining operation in South Africa has also made use of the Machine Terrain Mapping technology to great success – after heavy rains submerged their coal pit in 32 feet of water, the MTM equipped Pegasys allowed the miners to continue their operations with minimal delay.

Elaborating on the MTM Technology, Laedwig stated, “Pegasys uses bucket position information to allow operators to mine underwater where they cannot visibly see. This reduces the risk to personnel and improves efficiencies, while also assisting with slope management by reducing the risk of the machine undercutting itself.”

A Brief Overview of Troughed Conveyors