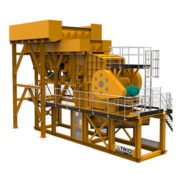 A jaw crusher is a large piece of equipment that’s used in mine and ore processing plants to crush rocks. The equipment was first introduced back in 1858 by inventor Eli Whitey Black who primarily developed machinery used for crushing stone. From there, jaw crushers have seen plenty of action in the pit and quarry industries as well as in recycling processes where large materials need to be reduced. Here we’ll be discussing how jaw crushers work and what are the different types of jaw crushers used today. Alternatively, should you require any further information regarding crushers don’t hesitate to get in touch with one of Oreflow’s industry professionals.

How do jaw crushers work?

Jaw crushers use compressive force to break down large materials into smaller, more manageable pieces. It has two crushing jaws (one is stationary while the other one is moving) that produces mechanical pressure for crushing the materials. The two vertical crushing jaws create a V-shaped opening called the crushing chamber where the materials are dropped off. It’s so-called because the opening starts off wide then tapers down to a V where the crushed materials go to. 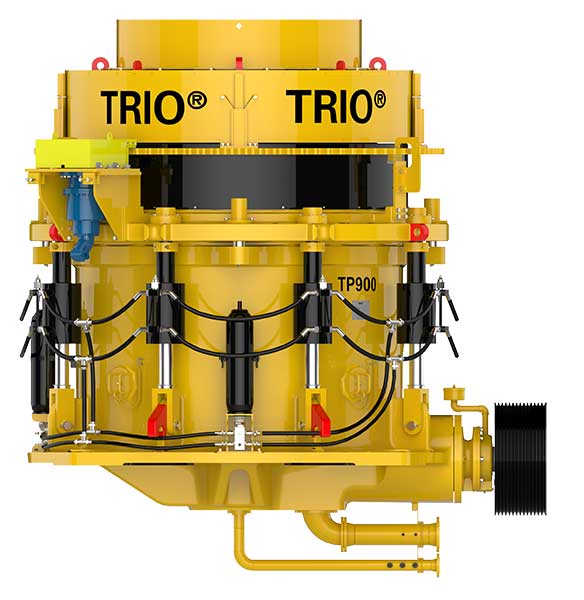 The size of a jaw crusher is measured by the top opening of the crushing chamber. For example, a 48” x 42” jaw crusher measures 48” from one crushing jaw to another and is 42” across the width of the two crushers. The primary applications for using jaw crushers are:

In single-toggle jaw crushers, the moving crusher operates in an elliptical pattern while in double-toggle jaw crushers, a pendulum motion is utilized in order to crush hard materials. The crushing force is generated by the eccentric shaft which is then transferred to the crushing zone by a toggle plate system. Spring pulling rods provide non-positive connection throughout the whole system and heavy loads are compensated by the centrifugal masses on the eccentric shaft.

Because of the angle of deep between the two crushers, the fed material can be reduced significantly upon entering the crushing chamber. The adjustable crusher settings and the suitability of the chosen tooth form for the crushing plates will determine the final size grain distribution of the crushed materials. An adjustable wedge system allows for multiple adjustments of the crusher settings. All parts of the adjusting system can be easily accessed and requires little to no maintenance. The parts can also be replaced in the event that it completely wears out.

All of the toggle plates used in jaw crushers use replaceable temperature pressure bars that are maintenance-free. A lubrication system is used to ensure adequate grease supply to the bearing points.

What are the different types of jaw crushers?

Jaw crushers come in different shapes and sizes to fit different crushing needs. Some of the most common types of jaw crushers used today are:

There are several other jaw crushers like bulldog jaw crushers and force feed jaw crushers. But for reference, we’ll focus on the two most widely-used jaw crushers in the mining industry. Down below we’ll discuss how these pieces of equipment operate and what makes them different from each other.

Single-toggle jaw crushers (also known as overhead eccentric crushers) operates with its eccentric shaft above it. In here, the eccentric is built into the the swing jaw plate that moves in an up and down motion as the flywheel is rotated. A single-toggle jaw crusher pivots at the bottom of the swing plate, causing the jaw to move in an arc-like direction. The material is crushed when the moving crusher compresses it against the fixed plate.

These types of equipment come with heavy-duty and light versions that are built with stainless steel housings. The eccentric shaft is made of high-grade forged steel and the moving jaw comes in either cast steel or welded version. The toggle on these crushers are kept in place by a compression spring. Shims allow for small gap adjustments since they are inserted firmly into the toggle block and mainframe.

In a double-toggle jaw crusher, the moving crusher jaw is driven by the eccentric shaft that moves the front and rear toggles up and down. Each shaft revolution causes the moving crusher jaw to close at the downstroke and open up during the upstroke. The toggle is kept in place by spring-loaded tension rod. The eccentric is found right behind the swinging jaw which prevents the eccentric from getting damaged since there is no shock loading transferred to the bearings and the shaft when the material is being crushed.

Jaw crushers are essential equipments in all mining and ore industries. These machines allows mine engineers to crush and compact large pieces of hard material in a safe and efficient manner. Thanks to its long service life and robust design, operating costs are reduced and downtime is minimised. If you want superior operating efficiency in reducing large rocks, then a jaw crusher is your best choice.

What You Need to Know About Conveyor Belt Spillage Control