News
You are here: Home1 / News2 / News3 / The Four Main Methods of Mining 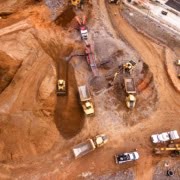 Mining is the process of obtaining geological materials and valuable materials from the Earth. Materials that are acquired through mining are metals, gemstones, limestone, clay, gravel, and many more that cannot be grown through agricultural processes. These materials cannot be artificially created inside a factory or laboratory, which makes them obtainable through mining only.

There are four main methods of mining through which several different materials are acquired. Here we’ll take a look at these four methods and learn how each of them are carried out.

Placer mining is a method of mining that uses water to recover precious metals from placer or alluvial deposits. Examples of deposits mined by placer mining are gold-bearing sands and gravel that has settled from rapidly moving streams to slower, more stable currents. Placer mining utilises the high density of gold to its advantage, causing it to sink at a much faster from moving water.

Panning is a form of placer mining that uses a pan where large amounts of water and a few handfuls of gold-bearing soil or gravel are placed. The contents of the pan are swirled together, causing the lighter material to be washed over the side and leave the gold and gravel behind. It’s one of the most ancient methods of extracting gold, and yet it’s still widely practiced today because of its low cost and simplicity.

Since the start of the 20th century, dredging became the most significant method of mining placer deposits, specifically bucket-ladder dredging which uses a continuous chain of rotating buckets around a ladder to scoop the material and deposit it through a barge.

In-situ mining (also called in-situ leaching or recovery) is a mining method that’s used to obtain minerals like uranium and copper through drilled boreholes into a deposit. In-situ mining works by dissolving naturally occurring minerals that are in a solid state. A leaching solution is pumped into the boreholes where it makes contact with the ore. The solution gets to work and dissolves the ore before being pumped back into the surface to undergo processing. This method of mining allows for the extraction of salts and metals from an ore body without resorting to conventional mining methods such as underground mining.

There are plenty of advantages to using in-situ mining. It’s the most environmentally way to mine ores, and involves minimal to no risk for both the workers and the communities surrounding the site. The reduced noise, dust, and greenhouse gas effects are what make in-situ mining an advantageous mining method, both in terms of its economic and environmental impacts.

The type of mining method used depends on a number of factors such as the type of mineral resource, the location of the minerals, and whether or not it’s justifiable to extract the mineral with expensive mining costs. Each mining method has its own advantages and varying levels of environmental impact, all of which are heavily considered prior to mining valuable minerals.

Should you require any further expert advise with regards to mining do not hesitate to get in touch with Oreflow who are a leading mining equipment supplier based in Perth, Western Australia.